Note: We have in the Bank of International Settlements, a body used to hide the transfer of funds from the US and UK to “Nazi” Germany. It cannot be scrutinized by any nation state but holds enormous influence over nations.
In that light India’s demonetization, the drive to cashless economies, demonizing China and Russia, all benefit the financiers and war profiteers.
Oh, almost forgot Bill ‘vaccine pusher’ Gates would love cashless. Does he comprehend the geopolitical deceits? Do you think a billionaire pushing vaccines, over-population, climate change and having direct access to national leaders does not comprehend the deceits? Microsoft was built on deceits!

The US paints itself as following the “rule of law”. It is indeed a charade! A deceit!

If suspicions of electoral fraud emanated from North Korea, Russia, China, India, Zimbabwe, Nigeria, Syria, what would be the response of western media and its citizenry?

The US and the West via NATO has appropriated for itself the enforcers of the rule of law. It decides what the rules are, when to enforce them and how they are enforced.

It should be clear to anyone paying attention that this is a disgusting deceit by the western ruling class. That the corruption would bare it ugly face so openly in their 2016 elections, underlies several things:

Post the 2016 US “consenting to a lesser evil” results, the charade of the rule of law both within and without Western societies will continue. In that light CETA, TPP, TTIP are further examples of the corrupt global policy enforcer rigging the rules to suit its ends.

Can a narcissists and his followers do the hard self reflection required to return America to its ideals, if ever it lived up to them? Can Americans acknowledge its theft of the land, the genocide towards it native peoples, the injustices it has forced on peoples around the world? Can America extricate itself from the Jesuit Papal knights, CFR? Can it wean itself off the teat of corporate consumerism?

The drug addict may hit rock bottom before making the vow to clean themselves up. Are the aggregate Americans up to the job? Are the world peoples up to holding them to account?

Note: Mark’s podcast provides insight into the mind of these globalist eugenicists.
It also reveals the refutation of their own religion or belief system.
If they are crass materialists and ruthless social darwinists, why the pretense and adherence to various ritualstic practises? These practise should have no actual effect in a crass materialistic world view! It also further erodes ANY claim of authority or right to rule, leaving only VIOLENCE and DECEIT! 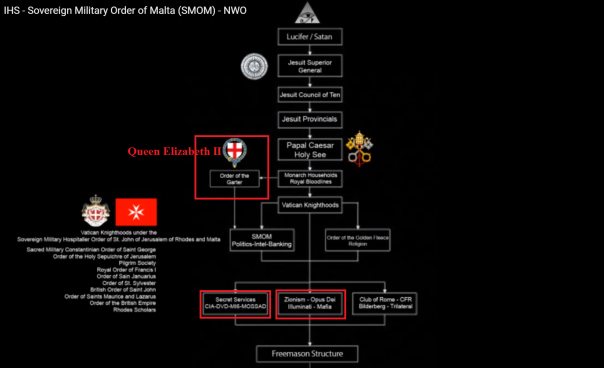 IMAGE from Youtube:IHS – Sovereign Military Order of Malta (SMOM) – NWO
Note: Crown corporation is NOT the Crown of Queen Lizzy II. Queen Lizzy II heads the “Order of the Garter” linked to the Knights of Malta. Tony Blair, George Bush Snr, Nelson Mandela are Knights Malta.
We can use the graphic as a framework to understand and place the treasonous players and psycopaths regarding events.

In this light, we can make an assumption that leaders in any field will be appropriated as per JFK’s secrecy speech. The most obvious match to JFk’s reference are the freemasons and Vatican knights. The BAR guild of private legalese practioners are involved in global deceits. Their deceits bring into question all legal systems based on their franchise: US, Commonwealth. Their location in the City of London raises further questions concerning their alliance to the Vatican.

This brings to mind a question. Does Mark Zuckerberg’s visit to Italy indicate he will soon become a Knight of Malta? According to the graphic the intelligence services are subservient to the Jesuit order, so why not appropriate the premier self-selected social surveillance network.
Related: The Top of the Pyramid: The Rothschilds, the Vatican and the British Crown Rule World