Published on 27 May 2012
Maurice Carney: A U.S.-based unit has been selected as the Army’s first “regionally aligned” brigade, and by next year its soldiers could begin conducting operations in Africa.

The issue of oil in west Africa, notably in the waters of the Gulf of Guinea have become increasingly strategic both to China who is roaming the world in search of future secure oil import sources, and the United States, whose oil geo-politics was summed up in a quip by then Secretary of State Henry Kissinger in the 1970’s: ‘If you control the oil, you control entire nations.’

Ebola, AFRICOM, Oil, China and the Petrodollar. Who would have thought. Multiple objectives

But contrary to popular belief, Turkey did not become a safe haven for terrorists only recently. The strategically located country has long been used as a base for various U.S./NATO terror operations. Since the 1990s, Turkey, along with Azerbaijan, has served as the main conduit for the ‘Gladio B’ operations, which introduced the tried and tested method of using jihadist mercenaries as foot soldiers to a new theater of operations, namely the Balkans, Central Asia and the Caucasus region.

Throughout the 80s he was armed by the CIA and funded by the Saudis to wage jihad against the Russian occupation of Afghanistan. Al-Qaida, literally “the database”, was originally the computer file of the thousands of mujahideen who were recruited and trained with help from the CIA to defeat the Russians. Inexplicably, and with disastrous consequences

Why is this relevant to Ebola? The uptick in Boko Haram activity in Northern Nigeria with the presence of AFRICOM in Liberia under cover of Ebola and the reported large intelligence presence in Nigeria prior to elections later this year. 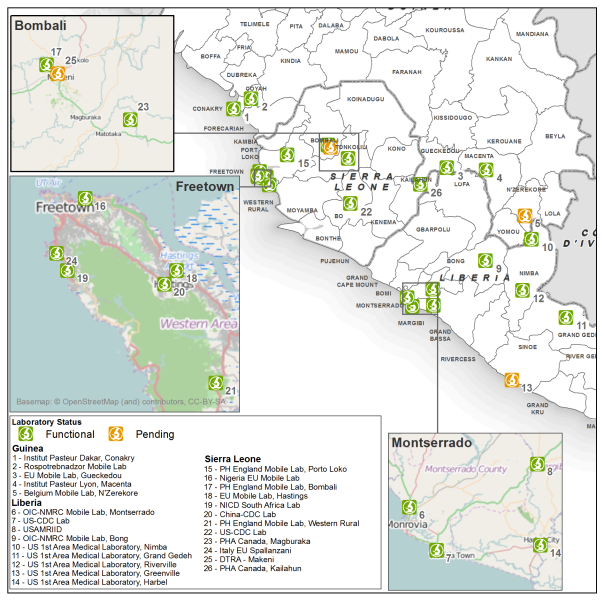 …Coordinator of the National Information Centre, Mr. Mike Omeri…in a statement on Tuesday, had said that agents of ISIS were in the country to recruit Nigerian youths to fight for the terrorist group.

In a statement signed by his Special Adviser, David Okoji, Omeri said three South Africans were among fighters recruited by ISIS under the guise of humanitarian support groups for refugees in Nigeria.

Speaking in a telephone interview with one of our correspondents in Abuja on Friday, Omeri confirmed that three South Africans had been hired to recruit young fighters for ISIS from Africa.

See Also:
Nigeria and US in fresh face-off
A few pointers to note for Nigeria in 2015.
– AFRICOM now has a presence in Liberia due to Ebola.
– A large unwelcome US intelligence presence in Nigeria with no noticeable gain yet increasing Boko Haram activity
– Pending elections in Nigeria 2015. Ex military ruler vs. Civilian president
– Boko Haram (false flag terrorism) in Northern Nigeria/Cameroun.
– US training inciting Nigerian army personnel to mutiny (coup?).
– Potential conflict in the Southern Oil fields – Niger Delta

http://www.sciencemag.org/content/345/6202/1369.full#F1
ABSTRACT
In its largest outbreak, Ebola virus disease is spreading through Guinea, Liberia, Sierra Leone, and Nigeria. We sequenced 99 Ebola virus genomes from 78 patients in Sierra Leone to ~2000× coverage. We observed a rapid accumulation of interhost and intrahost genetic variation, allowing us to characterize patterns of viral transmission over the initial weeks of the epidemic. This West African variant likely diverged from central African lineages around 2004, crossed from Guinea to Sierra Leone in May 2014, and has exhibited sustained human-to-human transmission subsequently, with no evidence of additional zoonotic sources. Because many of the mutations alter protein sequences and other biologically meaningful targets, they should be monitored for impact on diagnostics, vaccines, and therapies critical to outbreak response.

Note:
– diverged from central African lineages around 2004. NO outbreaks in Zaire or between Zaire and West Africa to account for 2014 outbreak in West Africa??
– no evidence of additional zoonotic sources. No fruit bats or green monkeys then
– 7 of the researchers have since died (Mostly Ebola, 1 of stroke)
END_OF_DOCUMENT_TOKEN_TO_BE_REPLACED

The face-off between Nigeria and the United States over the commitment and sincerity of the US military in assisting Nigeria to fight the Boko Haram insurgency worsened within the week.

This followed an allegation by a top Nigerian intelligence source that US trainers incited Nigerian soldiers to mutiny.

The source said that recent mutiny by Nigerian soldiers was as a result of the ‘negative teachings’ by US trainers, adding that it was a major reason the Federal Government stopped the US from training Nigerian soldiers on counter-terrorism.

The US, as well as the UK, France and China, had offered help in human and technical capacities to deal with the wider problem of terrorism in North-eastern Nigeria.

But the relationship between the two countries worsened when the US refused to sell military hardware, especially cobra helicopters, to Nigeria to prosecute the campaign against Boko Haram.

The security source, who pleaded anonymity, said the security chiefs and the Federal Government doubted the genuineness of the motive of the US security experts in the country.

The source added that despite the presence of the US experts, there was no noticeable impact on the task of recovering the abducted girls of the Government Girls Secondary School, Chibok.

He added that the US forces had not given the expected intelligence that could have been utilised by the nation’s security forces against Boko Haram.

“Another thing Nigerians should note is that since the Americans came here purportedly to help get the Chibok girls, they have not done anything. What have they done with all their technology and might? Is it not suspicious?”

When asked if the US would be asked to withdraw its intelligence staff from Nigeria, the source said, “They are a super power. It might not be easy to tell them to leave.”

“We find it difficult to understand how and why in spite of the U.S. presence in Nigeria with their sophisticated military technology, Boko Haram should be expanding and becoming more deadly,” he said.

Note: Nigeria is an Oil rich West African country that dealt with Ebola within months of its arrival in the country. A few interesting pointers to note for Nigeria in 2015.
– AFRICOM now has a presence in Liberia due to Ebola.
– A large unwelcome US intelligence presence in Nigeria with no noticeable gain.
– Pending elections in Nigeria 2015. Ex military ruler vs Civilian president
– Boko Haram in Northern Nigeria/Cameroun. Failed pretext for earlier involvement.
– US training inciting Nigerian army personnel to mutiny (coup?). Easy to do with low morale.
– Potential conflict in the Southern Oil fields – Niger Delta