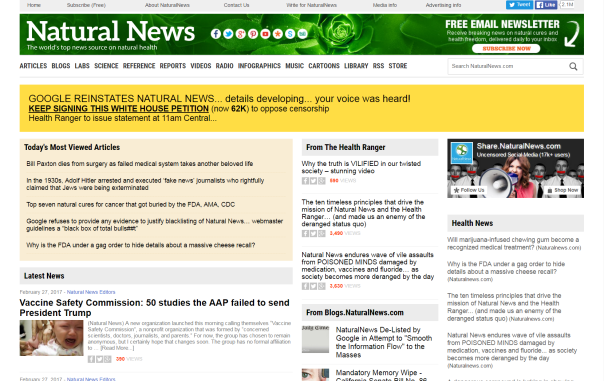 Google’s act of de-listing the whole naturalnews.com domain has prompted thought on its origins, its partners and alliances. We have made assumptions based on its early pronouncements: “Do no Evil”. We appreciate the tool (search engines) however, we now have to start considering who wields it and what their motives are. In that light the articles below from 2015 shed some light on the genesis of Google. Save the pages!

How the CIA made Google Inside the secret network behind mass surveillance, endless war, and Skynet— part 1 By Nafeez Ahmed

“In fact, the Google founder Mr. Sergey Brin was partly funded by this program while he was a PhD student at Stanford. He together with his advisor Prof. Jeffrey Ullman and my colleague at MITRE, Dr. Chris Clifton [Mitre’s chief scientist in IT], developed the Query Flocks System which produced solutions for mining large amounts of data stored in databases. I remember visiting Stanford with Dr. Rick Steinheiser from the Intelligence Community and Mr. Brin would rush in on roller blades, give his presentation and rush out. In fact the last time we met in September 1998, Mr. Brin demonstrated to us his search engine which became Google soon after.”

Why Google made the NSA Inside the secret network behind mass surveillance, endless war, and Skynet— part 2 by Nafeez Ahmed

One year after Google bought the satellite mapping software Keyhole from CIA venture capital firm In-Q-Tel in 2004, In-Q-Tel’s director of technical assessment Rob Painter — who played a key role in In-Q-Tel’s Keyhole investment in the first place — moved to Google. At In-Q-Tel, Painter’s work focused on identifying, researching and evaluating “new start-up technology firms that were believed to offer tremendous value to the CIA, the National Geospatial-Intelligence Agency, and the Defense Intelligence Agency.” Indeed, the NGA had confirmed that its intelligence obtained via Keyhole was used by the NSA to support US operations in Iraq from 2003 onwards.

David vs. Goliath: Health Ranger vs. Google from NaturalNews on Vimeo.

A comparison of the search term: “naturalnews” on various search engines.

Mercury, thiomersal, now there are two types of mercury both are toxic but here is the deal…they are not toxic once they go into a vaccine.