In light of Brexit, we can see how they can be aloof from the fray.
They would have a strong preference for EU integration sooner but Brexit is NOT a threat.
Also note the site used to facilitate the research is offline: http://muckety.com/

Note: Food for thought from Richie Allen! We can discount Macron but Le Pen?? Are the French in the same position as US voters where? Vote for Le Pen despite suspicions of controlled opposition. Reject the outright Europhile Macron and hold the faux Eurosceptic Le Pen to account?
What do ALL so called populist candidates have in common? A refusal to articulate to their supporters the deceit of  “money out of thin air” by the banksters. Austerity for us but not for them? Macron, Le Pen, Trump, Jeremy Corbyn, Nigel Farage. Tsipiras, not a  word as far as I can tell.
Forget fake news, let’s talk about fake austerity and banks

Emmanuel Jean-Michel Frédéric Macron…is a French politician, senior civil servant, and former investment banker. Born in Amiens, he studied Philosophy at Paris Nanterre University, completed a Master’s of Public Affairs at Sciences Po, and graduated from the École nationale d’administration (ENA) in 2004. He worked as an Inspector of Finances in the Inspectorate General of Finances (IGF) and then became an investment banker at Rothschild & Cie Banque.

A member of the Socialist Party (PS) from 2006 to 2009, Macron was appointed as deputy secretary-general under François Hollande’s first government in 2012. He was appointed Minister of Economy, Industry and Digital Affairs in 2014 under the Second Valls Government, where he pushed through business-friendly reforms.

Note: Macron is a leftist fraud! Remember Greece? Where, oh where is the intelliegent thought and rebellion we expect from the French? What does MSM say is his focus? Deregulation…corporatism unleashed.
Watch the MSM push the stinking lie that Macron is a political outsider. Sounds like another “outsider” – billionaire zionist Trump!
Macron debunked using only wikipedia in under 5 minutes. SKY/BBC lame, lame media!

“While it is impossible to imagine the University without David, he will live on in every scientific advance and breakthrough made in University laboratories” 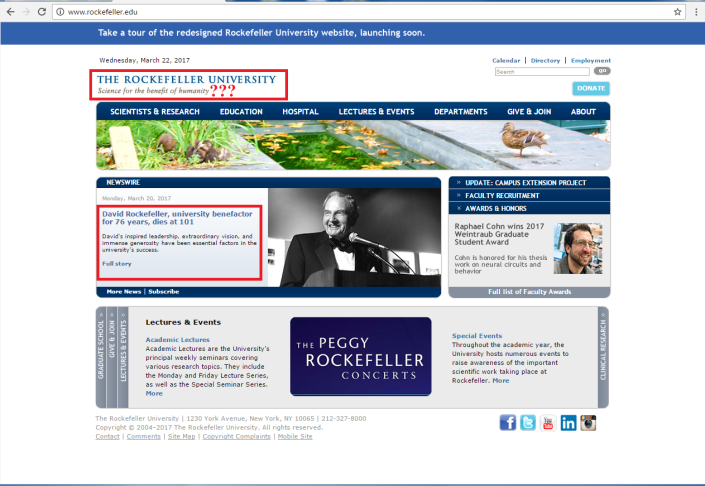 “Under his leadership, Chase was the first US bank to open offices in the Soviet Union and China.
In 1974, it was the first to open an office in Egypt after the Suez crisis of 1956.
He was also behind the project that led to the World Trade Center in New York City.
Mr Rockefeller retired in 1981 aged 65
Former President George HW Bush and his wife, Barbara, released a statement saying they were “deeply saddened” by the passing of their “wonderful friend”
…
He had six children – David Jr, Richard, Abby, Neva, Margaret and Eileen – with his wife Margaret (nee McGrath). She died in 1996.”

Note: This great philanthropist, did not fund the hemp plant as an alternative to OIL for plastics, drugs, energy. He did not explore natural means to boost immunity, he did not explore how to inform the public about the nature of the deceit of debt based money. As an economist did he inform US presidents of the deceit of  central banks? He did not fund the potential exponential gains in solar technology that could have followed the same trajectory as the microprocessor.

In short you could assert that technologies/information that empowered humanity are rejected, ignored by this philanthropist.

What are these globalist getting excited about now? Gene editing and manipulation. Permanent change in the gene pool.

Note: Mark’s podcast provides insight into the mind of these globalist eugenicists.
It also reveals the refutation of their own religion or belief system.
If they are crass materialists and ruthless social darwinists, why the pretense and adherence to various ritualstic practises? These practise should have no actual effect in a crass materialistic world view! It also further erodes ANY claim of authority or right to rule, leaving only VIOLENCE and DECEIT!

Chemists and biochemists are liable to limit themselves unduly to the purely material aspect of things. A chemist’s business is to deal with matter in its various forms; that is his job, and he need not be expected to go beyond it. A physicist takes into account the Ether as well, though he may, for a time, prefer to call it space. He is not limited to material particles, but studies the fields of force which connect them and make them active. The psychologist goes further still, and studies the action of the mind. I would I could say that the biologist is a student of life, but at present the tendency is for him only to study animated organisms and their behaviour, limiting his attention to what is manifested by the material processes brought about by life, and not thinking that life has any existence apart from its instrument of manifestation. We shall never understand the Universe by attending to matter alone and ignoring everything which makes it active and interesting.

Note: Another edifice in the western scientific deceit exposed. Are there methods to collect proof on the reality of life after death? How can we explore this scientifically? What industries, orthodoxies are threatened by these explorations?
Banking, military, Oil, Gas and thermonuclear industries are the biggest benefeciaries of the current deceits regarding the nature of our physical world, how we extract and transport energy. Furthermore common place acceptance of a non-materialistic existence uppends the statists and organised religion (vatican).

June 6th 2016
This a public notice to all tinpot dictators labelled as such by the west.

We hereby inform your excellencies that we are dropping any further pretence of being morally superior. We have conceded we are and have been hypocrites of the highest order in our claims of following the “rule of law” or practising “democracy”

We wish to give special notice to the following despots: Mugabe of Zimbabwe, Basher al-Assad of Syria, Kim Jong-II of N. Korea, Yoweri Museveni of Uganda, Vladimir Putin of Russia and  Teodoro Mbasogo Equitorial Guinea that though they have been singled out for particular notice their actions are in conformity with the corrupt actions of the US and UK over the past 20 years.

To a certain extent we were no longer able to competently maintain the charade, so often we outwitted ourselves and the plebiscites saw behind the curtain.

A case in point is Brexit. The plebs voted to leave the European Union on the 23rd June 2016. We are currently stalling for time to seek ways to invalidate the will of the plebiscites. God knows we will not be asking them any important questions in the future.

We have tried to give Queen Elizabeth II and the Pope the ability to claim ignorance of our deceits and despotism but unfortunately by their ceremonial consents they are complicit in  our despotism masked with displays of “democracy” or pious deference.

It requires less effort and sophistry to be openly corrupt, criminal, duplicitous and murderous in pursuit of our interests and the management of our human income generating stock.

If you seek further evidence of our hypocrisy reflect on our US FBI investigators agreeing that Hilary Clinton was grossly negligent in her duties as foreign secretary however as a member of our network, she will not get even a slap on the wrist or cheek. A “citizen” can expect the  whole statute book to be thrown at them.

We concede that this open display of contempt for “the rule of law” will require overt violence however we have built up the apparatus of the police and surveillance state incrementally whilst the plebiscites were occupied with Game of Thrones, X factor or their favourite sporting spectacle.

We may share some tricks of the trade in state-craft in the event you are bored and decide to practise some sophistry. Take the Chilcot Report, you will note the long duration and polite language for what was really our criminal destruction and exploitation of Iraq. We made sure Right Honourable Anthony Blair is well paid and protected for his good work in furthering our interests.

Another trick of the trade is to make your citizens dependent directly on the state for income or indirectly via state to corporate handouts. The plebiscites will consent to your actions despite knowing better. Scaring them with bogus bogeymen also works, you can position yourself as the strong person protecting the flock.

We know you will find it increasingly difficult to restrain wild laughter whenever we mention “law”, “democracy”, “human rights” however these platitudes sound good on TV and make for fabricated historical records as to current events.

The only thing we fear from the plebiscite, is that enough of them put their petty irritations of race, sexuality, religion aside and focus their time, effort, thoughts and imagination in nullifying our control. It is a fear but very remote as we have spent the past 4 decades poisoning their food and water, misinforming , debilitating their ranks. Our medical wing have created the perfect cover for our eugenics in the vaccine!

It has been rough on you and yes we had to get rid of Saddam and Gaddafi for trying to upset our cartel but that’s water under the bridge, after all we are now openly despotic birds of a feather.

We therefore apologise to all prior tinpot dictators henceforth called His/Her Most Honourable Excellencies.

Let us rule without pretence and enjoy the infinite printing power of our moneyed accomplices.

“There will be no public exit polls, but the hedge fund industry are rumored to be holding exit polls to get an early indication of the result. “

“Hedge funds, it appears, have been commissioning private exit polls so they can get an edge in currency trading before the official result of Britain’s vote on EU membership is announced. In the absence of published exit polls, the rest of us will be watching the foreign exchange markets for clues. To anyone considering a punt on sterling on referendum day, though, the advice should be: don’t try this at home.”

Polling companies have told the Financial Times that demand is high for their services on referendum day.

“Hedge funds have asked for exit polls and for hourly polls on the day,” one pollster said.

“Banks are certainly commissioning polls for their own consumption that are never released.”

The cost of an exit poll, where researchers record votes electronically and send them to headquarters, is around £500,000 (US$730,000) – much lower than the potential profits available from finding out whether Leave or Remain is likely to win, according to the newspaper.

Betting odds have suggested the chances of a Remain victory are as high as 80 percent.