A leading and inflammatory question? Yes, indeed, Brexit is that serious!

It rests on simple ideas. We are informed or rather the narrative is that the Queen is the protector of the interests of the common man in Great Britain and some commonwealth countries. She swore to this in her coronation oath:

” Will you solemnly promise and swear to govern the Peoples of the United Kingdom of Great Britain and Northern Ireland
…
Will you to your power cause Law and Justice, in Mercy, to be executed in all your judgements”
The Queen’s Coronation Oath 1953

We also note that the Queen leads the privy council of which the Prime Minister and his opposition are members. This acknowledes a deference to the Queen.

What happens in the following scenario:

The “sovereign” parliamentarians ignore the electorate by delays, obfuscations and rejection of the EU referendum.

In negating the will of the electorate the “sovereign” parliamentarians have relinquished their delegated right to govern.

The Queen is called on to consent to acts and statutes passed by a parliament that has lost its consent from the electorate.

The Queen can betray her stewardship and oath to ceremoniously consent or she can state that she cannot consent to “laws” brought forth by a parliament having lost its authority, goodwill and consent from the public.

Then there are the mundane and legal conceptions of Trust. 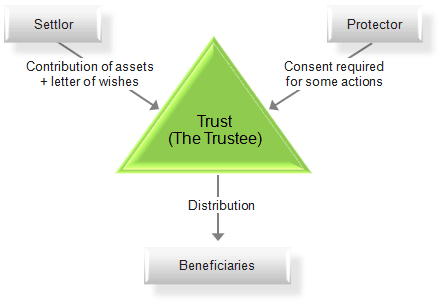 In the diagram let us say the “government” is the Trustee, if the People are the settlors and the Queen is the protector? Has she not failed in her duty?

I would contend that a can of putrid worms will be opened should “sovereign” parliamentarians decide to betray their trust!

Please feel free to rip apart my logic, omissions, mistakes. I look forward to an interesting debate or discussion on the constitutional implications of any betrayal of the Brexit result for the UK and the Queen.